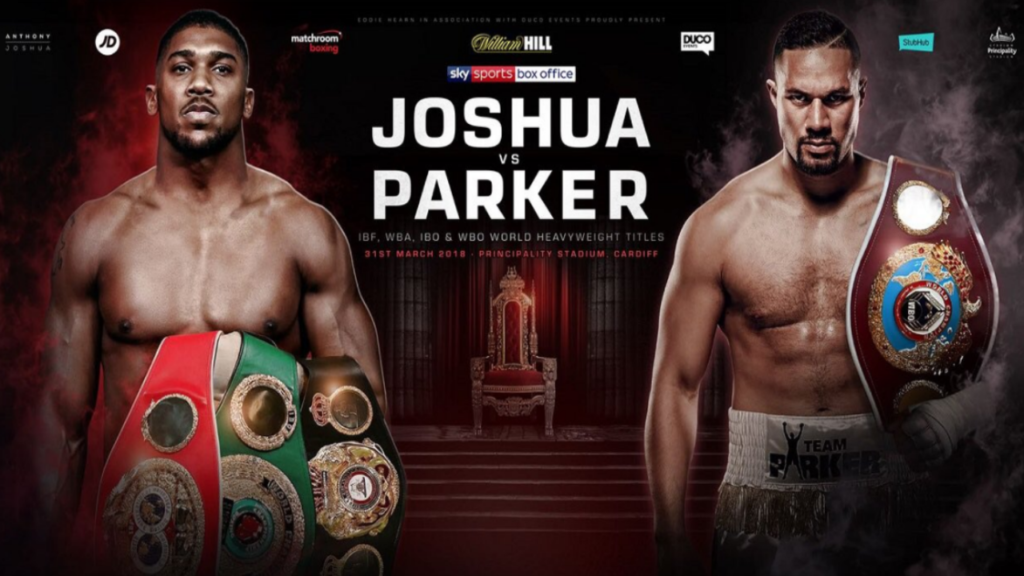 To be held at the Principality Stadium in Cardiff on the 31st of March will be the first major boxing bout of 2018. Anthony Joshua vs Joshua Parker. If Joshua beats Parker the world heavyweight champion will add another WBO belt to his collection. However Parker, the unbeaten heavyweight champion who is regarded as a 10-1 underdog by the bookmakers, believes ‘he is in for a huge shock. ‘ Meanwhile, Joshua is confident as he returns to defend his heavyweight world title belt.

Joshua will return to the ring after his victorious fight against Wladimir Klitschko, which was named by ‘The Ring’ as ‘Fight of The Year.’ Eager to defend his title, and with four world heavyweight title belts on the line this is definitely not one to be missed. The historic event, Anthony Joshua vs Joshua Parker, will be the first time that two reigning heavyweight champions have fought in Britain, as Joshua takes on Parker, he hopes to get one step closer to conquering the most glamorous division in the sport.

Born and bred in New Zealand, Parker is set to give Joshua a run for his money in this blockbuster heavyweight world title clash. He is currently the WBO heavyweight champion, having held the title since 2016, and will be putting this on the line in just under 2 months time.

Fan’s are being warned against scam tickets for the event, please be sure when purchasing your tickets that you do so from official vendors and avoid fraudulent tickets.

With many exciting boxing matches coming up in 2018, such as Carl Frampton vs Nonito Donaire, David Haye vs Bellew, and Amir Khan vs Phil le Greco, you can rely on Bouden Coach Travel to get you there in style.

IT WOULD BE OUR PLEASURE TO ACCOMMODATE YOU!

Get Social & Keep Up To Date With Us Here